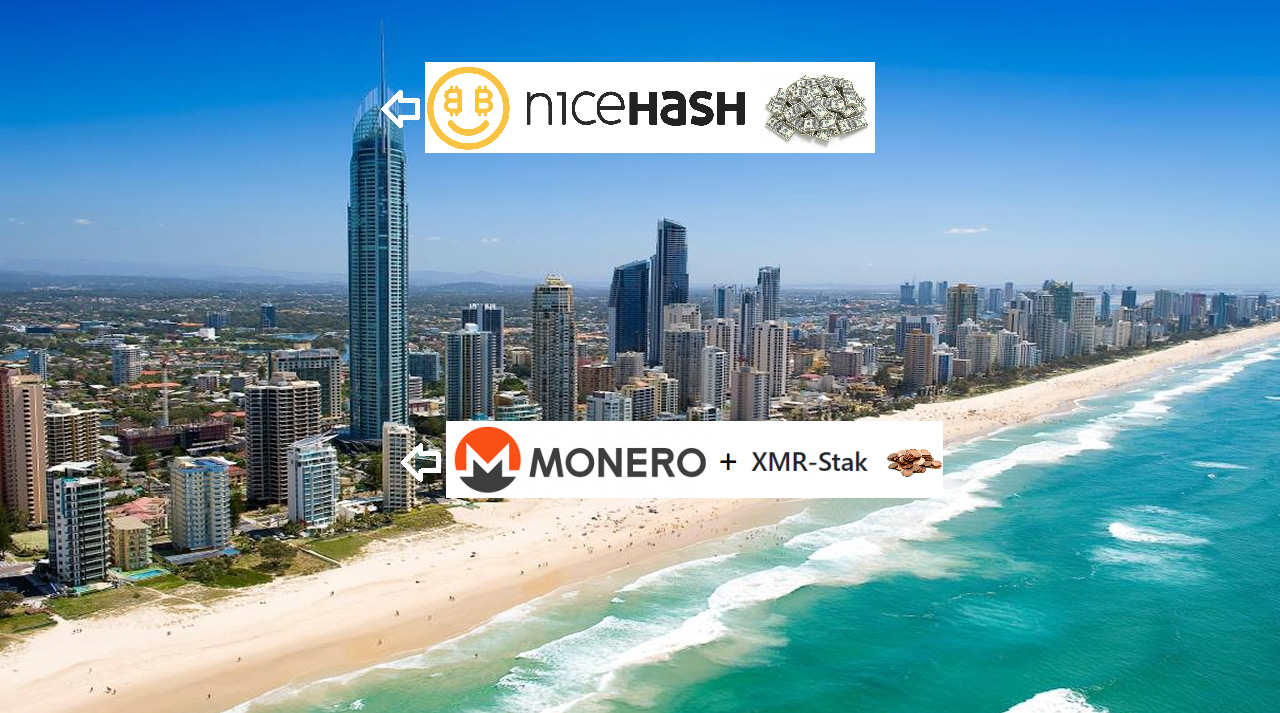 Please take the volatility of the crypto market into account when considering the 180 day mining time-frame of this blog post. Bitcoin reached almost $20k USD in late December 2017, then dipped to a low of $8k USD and is now trading at just over $11k USD. The alt-coin market had a similar bumpy run. The volatility has a direct impact on the profitability (or lack thereof) of mining.

A colleague at work mentioned that he had recently switched away from mining Monero (with xmr-stak on the supportxmr.com pool – my exact mining setup), and began using nicehash.com because of its superior returns (paid out in Bitcoin, BTC).

Interesting! After all, us miners are interested in maximising returns. I decided to perform a like-for-like comparison (90 days back to back).

With nicehash downloaded and installed, it benchmarks your system, allowing each mining instance to understand which algorithms it can mine effectively on any given hardware. Once nicehash starts mining, it changes the hashing algorithm based on cloud mining contracts that are available on the platform, while considering the algorithm for your rig, and the overall profitability (otherwise known as ‘switch mining’). For instance, my GPU based mining rig nicehash interface is currently showing me that in the last minute, it has used ‘equihash’, ‘blake2s’ and ‘lyra2rev2’ hashing algorithms. nicehash pays out BTC to either a nicehash or external wallet.

So here are my nicehash results, on exactly the same hardware that I used with xmr-stak/supportxmr:

So my clear and resounding conclusion is that nicehash pays more (in BTC) than xmr-stak into the supportxmr pool does (in XMR).

nicehash pays every couple of days, no matter the size of the outstanding mining balance. supportxmr pays when a minimum threshold of 0.1 XMR is reached.

I would recommend that anyone interested in mining cryptocurrency at least downloads the nicehash miner and allows it to perform the benchmark. Once the benchmark is completed, you’ll get an estimated daily earnings calculation. So far, this is the most profitable miner/mining method that I’ve been able to find for my equipment.

If you have any new ideas, please do share.